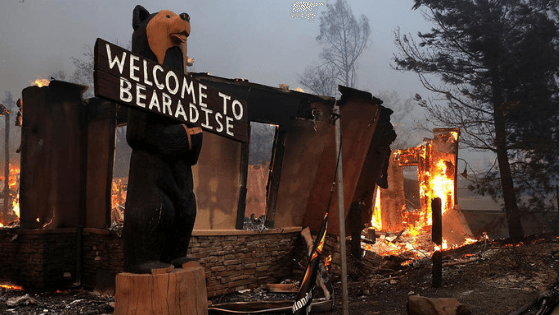 *Court-approved deadline for fire claimants to file claims against PG&E has been extended to December 31 at 5:00 p.m. (Pacific Time). File a claim for a large cash settlement in addition to your FEMA assistance. Victims are encouraged to apply because of the unknown economic status of PG&E. If you wait, you can be left with nothing. Call Now 530-212-7582

The Camp Fire was the deadliest and most destructive wildfire in California history to date. The fire started on Nov. 8, 2018, in Butte County, California. Utility companies such as PG&E are held to the highest standard when it comes to damages on life and property. The fire caused at least 85 civilian fatalities and destroyed 18,804 structures.

Our Camp Fire Lawyers at Potter Handy, LLP and Ray Quinney & Nebeker, PC have significant experience in representing victims of California wildfires. With over 20 years of litigation experience, our wildfire attorneys have successfully represented over 1000 plaintiffs who have been adversely affected by wildfires. These plaintiffs have recovered approximately $350 million in claims.

History of PG&E Incidents and Settlements

While each case is different, common damage categories include:

You may be entitled to damages that your insurance – even good insurance — won’t cover. In addition to underinsured homes, most insurance policies don’t cover vegetation that is not part of the landscaping, natural vegetation or compensation for you or your family for the upheaval caused by the utility-company-related Camp Fire. The law provides for more compensation than most people realize.

Learn more about Smoke, Soot, and Ash damage from a Wildfire.

When our Camp Fire Lawyers take on a case, we are consciously thorough in our investigations. We must be sure that we have identified all of your damages and accurately calculated them. We will not be satisfied with a case outcome unless you get every last penny you deserve from the parties responsible for the destructive Camp Fire.

When is the deadline for filing a Camp Fire Claim?

The judge overseeing the lawsuits against PG&E has extended the deadline to file claims related to wildfire losses to December 31, 2019. We encourage recent fire survivors to consult with a Camp Fire Attorney in a timely manner.

Our Camp Fire Attorneys can help you document your losses for purposes of the PG&E Camp Fire Lawsuit, as well as offer guidance on insurance and other matters that might arise.

Affected by the Camp Fire? Review Your Claim with a Camp Fire Lawyer

If you or a loved one has been a victim of a utility-company-related wildfire, we will seek damages on your behalf for the losses you have incurred with absolutely no out-of-pocket expenses from you.

We use cookies to ensure that we give you the best experience on our website. If you continue to use this site we will assume that you are happy with it.Ok